When Pachter opened the Moose Factory in 1998 , he created art critic “Don Rouge-Humber” to wax lyrical about his work.
Don has been so positive in his reviews that other artists have often asked Charles if he could review their work to0.
But as we have seen, Don is pretty much focused on Charles’ oeuvre! 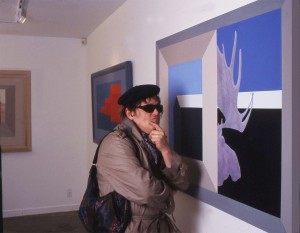 This artspeak quote by Don went a little too far. I am trying to teach him to be more brief and concise!

” Pachter’s current practice integrates sociological study of relations between self, other and environment, aligned with an interdisciplinary inquiry into the intersection of boundary, category, discipline and medium.
Largely conceptual and resulting from a process of systematic selection, his current work is a careful collage, formative reduction and subtle enunciation of that which is seen and that which constructs perceived meaning that seeks to construct and reconstruct nonlinear narrative through material articulation, cross-section of medium and atmospheric installation.”